The Moolamantra is used for Divine healing and to enhance the divinity from within you. 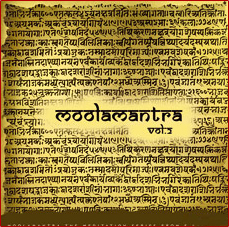 Whenever you chant this Vedic Sanskrit Mantra, even without knowing the meaning of it, that itself carries power. But when you know the meaning and chant it with feeling in your heart, then the energy will flow a million times more powerfully. It is therefore important to know the meaning of the Moola Mantra when you use it.

This Mantra is like calling a name. Just like when you call a person he comes and makes you feel his presence, in the same manner when you chant this mantra the Supreme Energy manifests everywhere around you. As the Universe is omnipresent, this Supreme Energy can manifest anywhere and anytime. It is also very important to know that invocation of the Moola Mantra with deep humility, respect and with great necessity makes the Divine Presence stronger.

OM
OM has 100 different meanings. It is said, in the beginning was the Supreme word and the word created every thing. That word is OM. If you are meditating in silence deeply, you can hear the sound OM within. The whole of creation emerged from the sound OM. It is the primordial sound or the Universal sound by which the whole universe vibrates. OM also means inviting the higher energy. This divine sound has the power to create, sustain and destroy, giving life and movement to all that exist.

ANANDA
ANANDA means bliss, love and friendship nature of the Universe. When you experience either the Supreme Energy in this Creation (SAT) and become one with the Existence or experience the aspect of Pure Consciousness (CHIT), you enter into a state of Divine Bliss and eternal happiness (ANANDA). This is the primordial characteristic of the Universe, which is the greatest and most profound state of ecstasy that you can ever experience when you relate with your higher Consciousness.

PARAMATMA
PARAMATMA means the supreme inner energy that is immanent in every creature and in all beings, living and non-living. It’s the indweller or the Antaryamin who resides formless or in any form desired. It’s the force that can come to you whenever you want and wherever you want to guide and help you.

SRI BHAGAVATHI
SRI BHAGAVATHI is the Feminine aspect, which is characterized as the Supreme Intelligence in action, the Power (The Shakti). It is referred to the Mother Earth (Divine Mother) aspect of the creation.

SAMETHA
SAMETHA means together or in communion with.

SRI BHAGAVATHE
SRI BHAGAVTHE is the Masculine aspect of the Creation, which is unchangeable and permanent.

NAMAHA
NAMAHA is salutations or prostrations to the Universe that is OM and also has the qualities of SAT-CHIT-ANANDA, that is omnipresent, unchangeable and changeable at the same time, the supreme spirit in a human form and formless, the indweller that can guide and help in the feminine and masculine forms with the supreme intelligence. I seek your presence and guidance all the time.